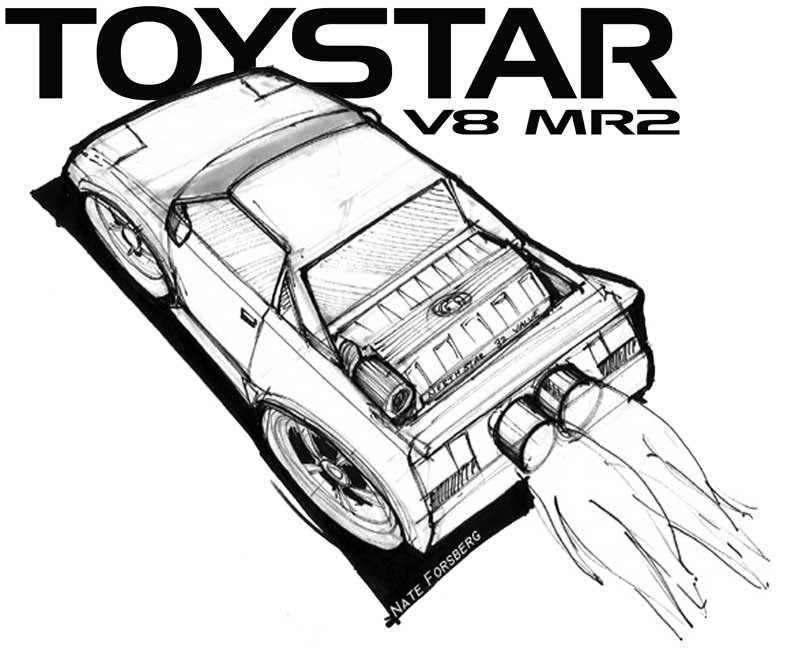 Almost 20 years ago I participated in a thread on the MR2FAQ forum (which would later become the MR2OC) that discussed the feasibility of putting a V8 into a MK1 MR2. We threw all sorts of ideas around, one was using the SHO V8, and the other using the Cadillac Northstar.
At about the same time, I had submitted the MR2FAQ.com and RacingStrong.com websites for review by the then top import magazine, Sport Compact Car. A few months later, they came out with an issue with the review of my sites. Great! Except they called me out about a potential V8 MR2. It was kinda funny though. A few weeks later, we were buying a car at a dealership. And inside the showroom was a brand new Cadillac CTS with the Northstar. I did up some real quick measurements in the showroom, and it looked like it would fit. But I had other projects I was doing.
Fast forward to November 2003. I was at my local junkyard looking at an MK1 MR2. I look up and over to my right, and there sat a Northstar powered Cadillac. I did some quick measurements with my arms and determined it would work. Negotiated a price for the Cadillac, and the next day it was delivered to my house. Then the real fun began…

Latest Updates May 25, 2020
Found the last archive of the website V8MR2.com. Slowly will relink everything. Just for history. All the good and a whole shit-ton of bad. It was a fun project. The car drove, and shifted. But did not stop well because I just had not sorted out the brakes.
The project ended when I got into endurance racing with 24-Hours of Lemons and ChampCar Endurance Series. I never looked back. We did use a bunch of parts from the V8 build to help build the other race cars. I do still have the engine and auto transaxle. Unfortunately I have lost many of the images from the build. While converting the old-style website to this current type, I will do my best to include all of the images that are left while still trying to keep the text I wrote every night after working on the car.

So what is a Northstar V8?
The Northstar V8 engine family is General Motor’s top-of-the-line luxury power plant. Introduced in 1993 in the Cadillac Allante, Eldorado and Seville STS, the 4.6L 32-valve dual overhead cam all-aluminum V8 engine was a quantum leap forward for U.S. automakers. Initially rated at 295 horsepower, the Northstar V8 has been ranked as one of the “10 Best Engines in North America” by Ward’s Auto World. It also beat out both Mercedes-Benz and BMW in horsepower per liter of displacement, fuel economy, and required maintenance (in the 1990s).

So why the first generation MR2?

Because it is the best MR2 of the three generations. It is lightweight, nimble, and mainly because I have a yard full of them. Weighing in at 2500 pounds fully loaded, this 1986 Toyota MR2 will be an absolute monster with over 350 horsepower sitting in the back seat!

With a world full of boy racer front-wheel-drive cars with screaming 4 bangers, and raunchy sounding 40-year-old technology mounted in Camaros and Firebirds I thought it was time to merge the Japanese car that helped start the import trend with one of Americas 10 Best Engines ever! Strip the multi-cam, multi-valve 4.6-liter aluminum engine of all of its luxury items, such as A/C, Power Steering, the quiet exhaust system, and the huge 3-phase Alternator and you have a monster motor just looking to play with some unsuspecting motorists.

I don’t drag race. But I can learn. I road race a 1986 Toyota MR2, the Krylon Special Lite. The first generation MR2 is my specialty. I know every single nut and bolt on these cars. I know the weaknesses, I know the what the car can take.

Now some have said the engine weighs a ton. In actuality it weighs less than 500 pounds fully loaded. It is only a few pounds more than a fully built 3S-GTE.

Why use am I using an automatic gearbox? Because it was there. I could use the Pontiac Fiero Getrag 4-speed or 5-speed. But then my wife can’t drive the car. Plus I am getting older. I am over 40 years old now. I am supposed to drive automatics now. It will just be more fun telling the kids I just smacked that he got beat by an automatic 4-speed.

Speaking of gearboxes, this slushbox is programmable. What else can be said of that? It learns how I drive, and adjusts to my style of driving, which my wife says is either floored or braking hard. I don’t think she knows what she is talking about.

So why am I doing this?

Back in 2002 the Racing Strong Motorsports™ and MR2 Owners Club web sites were reviewed in Sports Compact Car. They made mention of the fact that we were discussing tossing in a SHO V8 into one of my spare MR2s. There are a couple of SHO V6 powered MK1 MR2s, but I wanted something that would scare the pants on the Yo-Boyz. Well SCC stated I needed to quit talking about it and just do it. Well it was not that easy. I live in the middle of nowhere. Out in the boonies. Red necks surround me. It is not like where I grew up the the 60s and 70s (Mira Mesa, San Diego, California). This is the real country. No new stuff out here, unless you have a ton of cash. I work for the State of Virginia, have 4 kids ranging from 19 years to 2 years old. So finding these new fangled engines was not on my priority list. Until I opened the hood of the cadillac at my local junk yard!

So here it is. The world’s first Toyota MR2 with a V8 that is designed for street use. There was one tube framed Le Manns racer MK2 MR2. But that was never designed for public roads. Mine is! I want to rule the world with this engine. 500 horsepower is just a few thousand dollars away. Put that in a 2300 (goal weight at end of project) pound go-kart and the torque alone should stop the world from spinning!

I learned a lot putting the Toystar together. Mainly on what not to do. So we have started the project over. Using the race car chassis, the Krylon Special, everything from the red chassis is being brought over. The new chassis will be built as a Hill Climb race car. Light and powerfull we will be racing in the unlimited class against ex-Indy cars, SUVs with NASCAR engines and extreme exotics with huge horse power.

The Krylon Special has been seen in Savage Land Pictures “Apotheosis”. This car has quite a history included a failed 5-star hotel parking lot engine swap, the chase car used in the film that almost got me banned from my own message board, and loads of awesome high speed videos that are on the underground of the interweb.